The following is part of a lecture I gave on January 17, 2011, in Miami, at the above mentioned SPME conference. Many Thanks to Sam Edelman and SPME US for inviting me and to Judith Jacobson for introducing me on that panel.

Most people think that the book “Israel Lobby” by Stephen Walt and John J. Mearsheimer was published in 2007 – at the same time in the US and in Germany, by the way. Well, the first edition of that book was rather published in 1940 – by leading National Socialist anti-Semitic publicist Prof. Dr. Johann von Leers. Von Leers published “Kräfte hinter Roosevelt” (“Forces behind Roosevelt”) in Berlin in 1940. One of the first bloggers who dealt with this was LizasWelt[i], a well known blogger in Germany.

However, not many scholars dealt with this so far.[ii] (However, co-panelist Marc Weitzman also mentioned Johann von Leers, and I referred to this. AIPAC Jonathan Kessler mentioned in his impressive presentation about Walt/Mearsheimer’s Israel Lobby the role of the Yale Political Union in promoting John J. Mearsheimer at an event in September 2008, an event I myself attended and reported about it here).

The publishing of the book “Israel Lobby” in 2007 both in the US and Germany indicates an increasing hatred of Israel and – in the case of Germany – an increasing anti-American political culture. Anti-Americanism was the response in Europe and Germany to the events of 9/11. Some left-wingers in Germany ordered “Bin Laden cocktails” on that Tuesday, September 11, 2001, in their favorite bars. Anti-Americanism and anti-Semitism are close allies, particularly in Germany.

Well: In 1940 Professor Dr. Johann von Leers published the book “Kräfte hinter Roosevelt” (“Forces behind Roosevelt”).[iii] At the end of the book you find announcements from the same publishing house, including books on “Jewish Blood Libel”[iv] and “Jewish Imperialism”[v]. 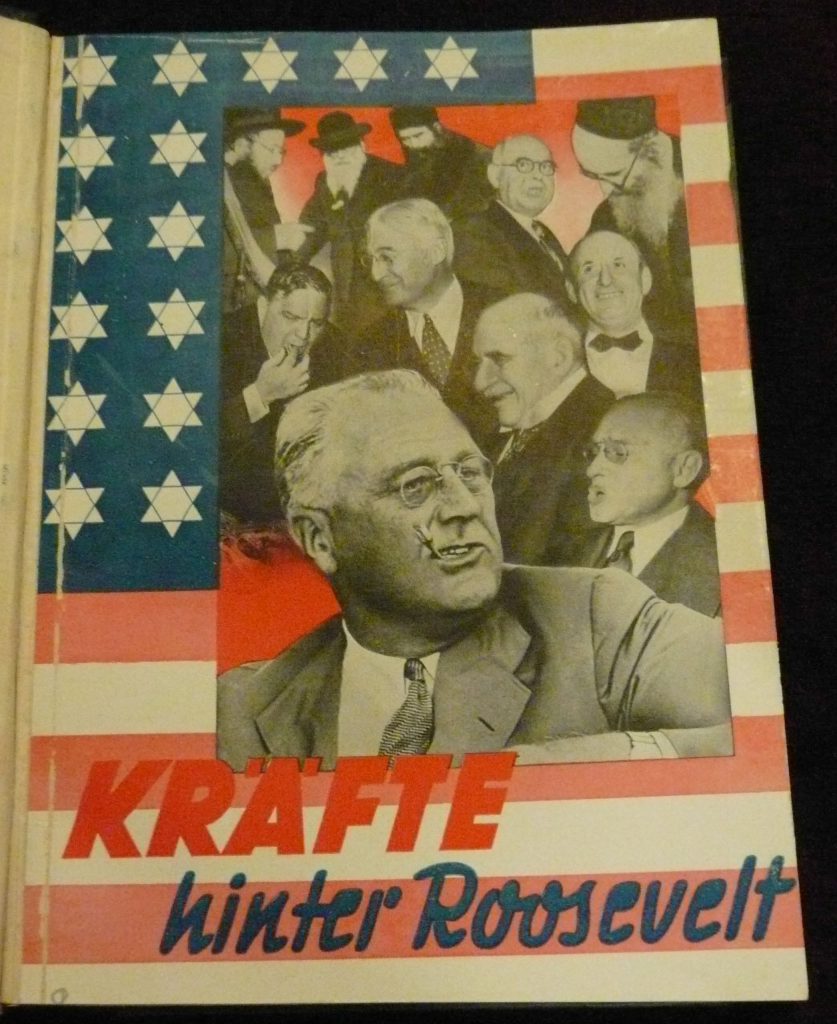 Von Leers begins his book by emphasizing the German love of American freedom and the history of the settlement movement, saying that Jews had not been involved in it. He remembers stories about America, praises the “backwoodmen,” saying that from the very beginning a “worm”[vi] was working in this America. The puritans had been covered Jews.[vii] Von Leers can’t stand that Americans – as he portrays them – revolted not just against England, rather against every kind of ruler (“Herrscher”) or kingdom. And this ongoing revolt against tyranny was based on the Jewish influence, according to von Leers.[viii] He is in support of anti-Jewish pogroms in Czarist Russia, like in 1903 (Kishinev) or in 1905. He literally denounces American activities to support oppressed Russian Jewry.[ix]

In addition von Leers mentions the “Joint Distribution Committee,” and its support for Jews in Palestine.[xii] Von Leers says that “Zionism” “is at war with all other peoples” (!).[xiii] He says that “a few small groups” acted against Jews, including publishing the Protocols of the Elders of Zion, of course articles of Henry Ford in the “Dearborn Independent” in Michigan, but also activities of the Ku-Klux-Klan.[xiv]

Remember: Nazi anti-Semitism like that of von Leers – one of the leading Nazi authors – was anti-Zionist. This as a reminder of those people who still claim that anti-Zionism has nothing to do with anti-Semitism.

Von Leers makes lists of – in his fantasies – influential Jews. Bernard M. Baruch is called a “Mammonist,”[xv] using the then fashionable and still existent vocabulary and ideology of anti-capitalist anti-Semitism.[xvi]

Von Leers uses conspiracy theories as well, saying that several mysteries surround deaths in recent times – of course “the Jew” was behind this. He says

“Murder is an old Jewish arm. Jews always killed their political enemies, to path way to their world domination.”[xvii]

This is a typical case of pathological projection: von Leers projects his own will to mass murder onto the Jews, framing victims as Jews.

The last chapter deals with Roosevelt and Bolshevism, saying that America will become communist the day they declare war. Anti-Semitism and anti-Communism are a core element of German Nazi ideology.

Finally von Leers says that Jews always (!) wanted to kill “the best among the non-Jews,” this is the “mystery of blood” according to Nazi von Leers. He says that this mystery of blood puts Roosevelt close to Stalin…[xix]

Von Leers wrote many booklets and brochures to spread German National Socialist anti-Semitism. In “Rassische Geschichtsbetrachtung”, published in 1941, he writes about the “De-Judification” of Germans themselves – he had a pathological fear of being Jewish inside! He pleads for “Dejudaization of Germany”, “Blood and Soil” and a “Nordic way of economic thinking”.[xx]

Von Leers was one of the leading Nazi anti-Semites and propagandists. He is all the more important for research because he then converted to Islam after 1945, going to Egypt in the mid 1950s and spreading Jew-hatred and anti-Semitism in the Arab world, after having been in Argentina before.

The cover of “Forces behind Roosevelt” shows eleven persons, with Franklin D. Roosevelt in front. Four orthodox looking Jews with hats and beards are accompanied by six other people rather looking like business men or celebrities. All are shown as Jewish, because the entire cover is framed in the American flag. The flag, however, has Stars of David instead of simple stars.

My message: The cover of the German edition of Walt/Mearsheimer’s “Israel Lobby” has clear similarities with an anti-Semitic book published in Nazi Germany by Johann von Leers in 1940, “Forces behind Roosevelt.”

Both covers use Stars of David instead of simple stars in their portraying of the American flag. The German publisher of Walt/Mearsheimer is Campus publisher, based in Frankfurt AND in New York City.

In an e-mail to the author Campus publisher Frankfurt justified the use of that cover and admitted that they created this cover by their own.[xxi] Obviously they have similar ideas about America and the “Israel Lobby” like Theodor Fritsch publisher in 1940 (respective 1942, third edition).

[ii] Herf analyzes von Leers in Jeffrey Herf (2006): The Jewish Enemy. Nazi Propaganda during World War II and the Holocaust, Cambride (MA), London: The Belknap Press of Harvard University Press, 134-136; he writes on page 328, footnoe 151 that the first edition of von Leers (see next footnote) was published in 1941, though it was published in 1940 (long before the US joined the Second World War). Herf does not deal with the cover of that book, though analyzes other important aspects of that anti-Semitic book.

[iii] Johann von Leers (1940)/19423: Kräfte hinter Roosevelt, Berlin: Theodor Fritsch Verlag. This publisher has an icon, made of a sword and a kind of a swastika. The cover was made by “Karl Hanisch”, ibid., 4.

Forget About Nazis, Talk About “Islamophobia”