How German is the Jewish Museum Berlin?

Currently, the “Jewish” Museum Berlin is criticized for its distorting of Jerusalem and the Jewish impact on Jerusalem. Volker Beck (The Greens), longtime MP (1994–2017) and former head of the German-Israel Group of Parliamentarians in the German Bundestag (2013–2017), on January 25, 2019, writes in the weekly Die Zeit about an exhibition in the Jewish Museum about “Jerusalem.” The exhibition downgrades the Jewish role of Jerusalem while embracing the Arab or Palestinian narrative. It distorts the Jewish history of that city, but devotes much space to the al-Husseini family, for example, without even mentioning the pro-Nazi approach of Jerusalem Grand Mufti Amin al-Husseini.

Then, according to Beck, the museum promotes three groups of particular pious Jewish groups – Neturei Karta, Ne’emanei Har ha-Bayt and Women’s of the Wall. As if antisemitic Jews who collaborate with Holocaust deniers and Iran like Neturei Karta have anything to say about believing Jews. Beck focuses on both what the exhibition shows and what it does not show and say. It shows the “Nakba” and ignores the “600.000” Jews who had to flee Arab states after 1948. This pro-Arab and rather anti-Jewish outline of that exhibition is just the latest scandal of this huge German national institution.

I myself, for example, am a long-time critic of the Jewish Museum and their pro-Islam as well as post- or anti-Zionist agenda in recent years. I am also known as critic of Netanyahu and his right-wing politics, I even lost my job ad editor-in-chief of a small Jewish monthly, the Juedische Rundschau, in 2014 due to my criticism of Bibi on Facebook. Then, I criticized Netanyahu in 2017 in a foreword to a German translation (which I did alongside with my friend and colleague, Arabist, political scientist and Orientalist Michael Kreutz) of the book “The Israeli Nation-State”, co-edited by Fania Oz-Salzberger and Yedidia Z. Stern, both promote the Jewish and democratic state of Israel and are known as fierce critics of Netanyahu.

Michael Wuliger of the leading Jewish weekly in Germany, the Juedische Allgemeine, published by the Central Council of Jews in Germany (“Zentralrat der Juden in Deutschland”), attacks the Jewish museum in an article on January 24, 2019. He analyzes the failure of the Jewish Museum Berlin’s head Peter Schaefer, who is a historian of ancient times. Schaefer is responsible for all the distortions in that exhibition and much more, for the post- or anti-Zionist outlook of the entire institution.

That became clear in summer last year, when the Jewish Museum announced an event with pro-BDS author Sa’ed Atshan from the US, a Palestinian from East Jerusalem. After criticism, the event was not cancelled but took place at another troubling Berlin institution, the ICI (Institute for Cultural Inquiry), with the very same moderator as planned by the Jewish Museum, Katharina Galor, an archeologist. I deal with this and many other historical and contemporary aspects of antisemitism in my new book, “The Complex Antisemitism” (in German).

Another event by the Jewish Museum took place in fall 2018, about “Islamophobia”, organized by Yasemin Shooman, a Muslim co-worker at the museum, who wrote her PhD at the Center for Research on Antisemitism at Technical University Berlin (ZfA) under the auspices of controversial historian Wolfgang Benz, then head of the ZfA. Benz had honored his own PhD advisor from 1968, Karl Bosl, like in 1988, when Bosl (1908–1993) turned 80 years old. In 2009, Benz mentioned Bosl in the announcement material for a lecture. Bosl was a member of the Nazi Party (NSDAP) and was paid by a project of the “Ahnenerbe” of the SS (Schutzstaffel) – the SS was a central organization in the Shoah.

Bosl took place in the last conference of Nazi historians mid-January 1945 – that event took place in the birthplace of the “Führer” Hitler himself, in Braunau am Inn (today: Austria), to emphasize the solidarity of these historians with the “Führer”. After 1945, Bosl was still active in antisemitic circles, in 1964 he compared the expulsion of Germans from the East to the Holocaust, embraced antisemitic elements of German history like Ernst Moritz Arndt and spoke at the grave of another former full-time Nazi, Theodor Mayer, in November 1972.

A Jewish Museum’s event in fall 2018 – Living with Islamophobia – announced Moustafa Bayoumi, a strong anti-Israel activist, who did a book on the jihadist ship Mavi Marmara from 2010. Other participants of that event were no less troubling and known for their anti-Zionist politics or the downplaying if not affirmation of Islamism, like Naika Foroutan. In her doctoral dissertation she embraced then Iranian President Chatami (who called Israel a “cancerous tumor”) and framed then Israeli Prime Minister Ariel Sharon as “state terrorist.” This was the start of a wonderful career of Foroutan in German academia.

Journalist Alan Posener criticized that event in September 2018 in the daily Die Welt. He writes about the coming new main exhibition at the Jewish Museum, which will open by the end of 2019. What seems to be clear so far is the fact, that there will be no special room dedicated to Zionism, one of the most important aspect of Jewish history since the late 19th century. Of course, Zionism will not be completely ignored, but will play a minor role in that new main exhibition.

On the other side, Schaefer emphasizes the role of a “Jewish-Muslim Forum”. Ignoring Islamism is a core element of Schaefer’s ideology, following Shooman, who even publicly attacks the representative of the Jewish Community Berlin for the fight against antisemitism due to his criticism of Muslim antisemitism and a particular dangerous Islamist institution in Berlin. Shooman published her article in 2018 in a Jewish journal called “Jalta,” made by and dedicated to post- and anti-Zionist Jews.

The connection of the Center for Research on Antisemitism and the Jewish Museum is of great importance. In 2013, for example, they both organized an event with British anti-Israel activist Brian Klug, despite international criticism, organized by my center, the Berlin International Center for the Study of Antisemitism (BICSA). Shooman is among the most controversial co-workers at the Jewish Museum Berlin, as her downplaying of the Islamist threat, the fantasy of Jewish-Muslim cooperation and her anti-Israel stance are obvious.

Many in Israel or the US might think that a Jewish Museum is both pro-Jewish and run by Jews. Not so in Germany. The best known Jewish Museum in Germany is the Jewish Museum Berlin. It is mainly funded (some 75 percent) by the German federal government and its Representative for Culture and Media, Monika Gruetters (CDU, Christian Democratic Union).

But there is much more to say about the “Jewish” Museum Berlin.

Already at the opening of the Museum in 2001, the German nationalist impact of the museum became clear. Journalist Henryk M. Broder attended that event and wrote about it. He analyzed the distortions of the event like the omission of portrays of several of the most famous German Jews, including Rosa Luxemburg, the Communist who was killed on January 15, 1919, Karl Marx, Jakob Wassermann or Gershom Scholem, the Zionist who left the Weimar Republic in 1923 for Palestine and criticized the “myth of German-Jewish symbiosis”.

This myth, though, was at the core of the opening exhibition as Broder wrote. He also focused on the entry of the museum in 2001, where at the opening gala with 850 VIP guests a blackboard out of glass with the names of leading German banks, industrial companies and individuals greeted the audience. That blackboard indicated, for whom the entire Jewish Museum Berlin was made for: Germans, to be absolved of their crimes of the Holocaust, to promote themselves as the new and real heroes of morality in the 21st century.

The German government and Gruetters are also funding the Barenboim-Said Academy in the heart of Berlin, vis-à-vis the Foreign Ministry. Thomas Weidauer and I criticized that institution in June 2015, when the roofing ceremony took place. It is named after Edward Said, a leading antisemitic and post-Orientalist author with immense influence among anti-Zionist academics around the world. Daniel Barenboim was not only a friend of Said, but is also an ally of Said’s widow Mariam Said. She has close connections to the BDS movement, in 2010 she defended the work of the West-Eastern-Divan-Orchestra (WEDO) by Barenboim at the hardcore anti-Zionist page “Electronic Intifada”. Mariam Said claims that WEDO is part of the very same battle against the Jewish state than others in the broad BDS camp.

Gruetters and the German federal government are world champions in hypocrisy and claptrap – publicly they denounce the BDS movement, but internally they are funding pro-BDS institutions or museums that downplay the Islamism threat or promote the fake Jewish-Muslim collaboration.

It is an imposition for Zionist scholars to need to go to the Jewish Museum Berlin’s Blumenthal Academy to study Hachschara and the Chaluzim, who prepared for Aliyah in the mid and late 1930s, to escape Nazi Germany and to help establishing a secure haven for Jews in the Middle East. When I was employed at the University of Hannover at the Center of Garden Art and Landscape Architecture (CGL) in 2015 in a project about landscape architecture, Zionism and Hachschara, I went to the Jewish Museum’s Blumenthal academy. They hold a wonderful body of original sources, including letters, brochures, booklets and books, pictures and the like from the Zionist movement in Germany. For example, I discovered a letter dated July 5, 1938, from a Kibbutz in the region of Thuringia, “Kibbutz Mitteldeutschland und Thüringen,” where the author is very happy that his friend will be allowed to join youth Aliyah.

The Jewish Museum Berlin is a German institution. It is dedicated to German ideology. This ideology is based on the fantasy, that Germany and Germany alone is the superstar of morality in the 21st century. No one killed so consequently the Jews than the Germans did. And no one remembers the Holocaust like the Germans. That is the one and only reason, why the German state is funding this institution. They employ and invite Muslim, Jewish and other anti-Israel people, invite pro-BDS agitators, and organize exhibitions that distort the Jewish connection to the city of Jerusalem.

Since when translates “old” into “wise”? Peter Schaefer is an old man (born 1943) and may not know what BDS or the three D’s stand for (Demonization, Double Standard, Delegitimization). On the other hand, he might know that very well. Finally, in the interview with the German TV he uses the antisemitic conspiracy myth of “foreign” influence on Germany (like the stupid intervention by Bibi). He ignores German critics, both Jewish and non-Jewish ones.

In 2012, the Jewish Museum Berlin hosted leading anti-Zionist superstar from California, Judith Butler, who spoke with pedagogue Micha Brumlik, himself a diaspora oriented anti-Zionist who always emphasizes that he is supposedly against antisemitism (like the Iranian threat). The house was packed.

Today is Holocaust Remembrance Day, January 27, the day when the Soviet Red Army liberated Auschwitz and the few survivors there. It is time to stop the hype about the “Jewish” Museum Berlin. It is a German National Museum as well as an anti-Jewish Museum. Survivors and their relatives should think twice before giving their historical documents to that institution, for example. Tourists should be aware that the name “Jewish” does not mean that it is a pro-Jewish institution.

Dedicated in honor of Michael’s birthday 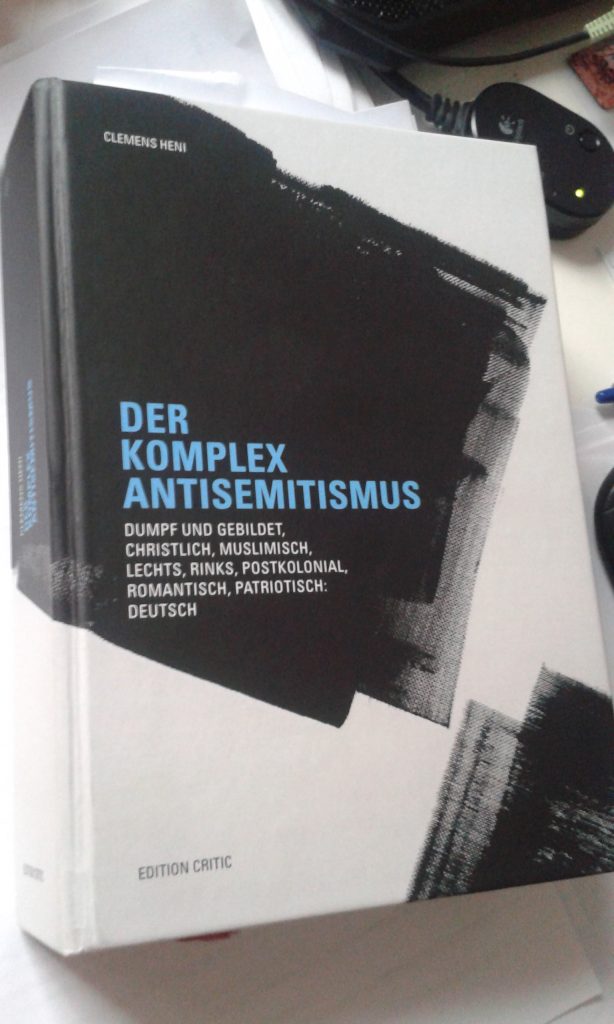